Something Completely Unrelated to Accordions 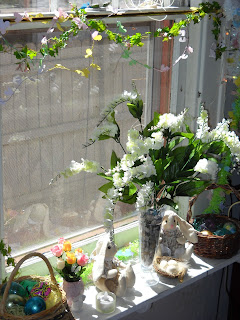 Minnesota has snow, lots of it.  Minnesota has cold, severe and long-lasting.  Minnesota also has people like me who will decorate for holidays to keep the depressing darkness of winter away, hence one window of my spring display in one south window of our Minneapolis home. Any excuse for a party, I say!
Posted by Dee at 01:03 No comments:

Laps, Chairs and Behind the Bar at Walker Ethnic Fest


Last month I promised to publish some pictures from the Walker, Minnesota Ethnic Fest.  Here's my absolute favorite, it should be titled 'How to Play the Accordion While Sitting on a Lap of Someone You Do Not Know'. The answer is, smile!


OBI has told stories both in person and on the radio of our night in Walker at the American Legion Post sitting on laps, standing on chairs and performing behind the bar.
We think the fine folks in northern Minnesota enjoying pull-tabs, beer, great food and good friends didn't quite know what to do with us in our costumes playing Balkan music until we let it be known we'd take beer as a tip for playing.  In a flash we had never-ending pitchers of excellent beer and a whole room of new friends. During one rousing Albanian tune Katrina played her solo standing on a chair to cheers from the crowd.

And just in case you think Katrina and I were the only ones having all the fun here's a picture of OBI behind performing behind the bar while the Post Commander took this picture and made a video of us to be shown on the Legion Post's big screen TVs throughout the year. Hmmm.....I think Colleen (violin) was sitting on the edge of the sink.

I have one thing to say about the evening........Spencer-Ross American Legion Post 134 in Walker, Minnesota you are the BEST!
Posted by Dee at 16:15 No comments:

One might ask where I've been for the last month.  The answer? In 'Heaven', the premiere of a new stage work presented at the Guthrie Theater by the Flying Foot Forum and directed by Joe Chvala.
It was an amazing story set in Bosnia during the war (ca. 1995).
Posted by Dee at 17:24 No comments: