Posted by Dee at 13:46 No comments: Links to this post

From a Friend - A Song about Valjevo, Serbia

Posted by Dee at 22:41 No comments: Links to this post

Learning to speak the Roma Language

Each weekday at Amala School we will have Roma language lessons in addition to solo and group music tutors.

The following text and alphabet were copied from a great website, http://www.omniglot.com/writing/romany.htm. I personally lay no claim to the information since I am totally ignorant about the language of the Serbian/Romani (Gypsy) people. However, Amala School, Veljevo, Serbia, should take care of that.

Romany
Romany, or Romani, is an Indo-Aryan language spoken by about 5-6 million Roma people throughtout Europe and the USA. The largest concetration of Roma people live in Romania. In English these people are often called Gypsies. The language is closely related to the languages of northern India, particularly Punjabi, and the Roma are thought to have originally come from that region. Some people consider Romany to be a group of dialects while others think there are several, closely-related Romany languages.

The Muslim invasions of the northern part of the Indian subcontinent around 1000 AD resulted in massive movements of populations, probably including the ancestors of the Roma, who are thought to have moved into Anatolia. In 1300, after the Mongolian invasion of Europe, the Roma moved west into Europe and took up a mainly nomadic lifestyle.

Romany alphabet (Romani šib)
This is the official standard alphabet for Romany. It was standardized in 1990 at the Fourth World Romani Congress in Serock, Poland. This alphabet is used by all the Romany languages/dialects except Carpathian Romany and Finnish Romany.

Posted by Dee at 16:35 No comments: Links to this post

In the glittering tradition of American movie grandeur, here's a little memory of how thing might have been in the 1930s and 1940s when visiting a movie theater. 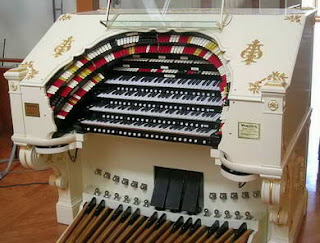 I lived this memory tonight at the Heights Theater in Columbia Heights, Minnesota where a musician performs for a half an hour before the movie begins. I'll be sharing this with the musicians in Serbia because it is just so Hollywood and so American. Especially the part at the end with the organ sinking into the pit as the disco ball swirls during the rousing final chords!

Posted by Dee at 00:15 No comments: Links to this post