On the Far Side of Accordions

If there's one item that keeps reappearing in my life it would be this cartoon which says, "Welcome to heaven, here's your harp. Welcome to hell, here's your accordion." This Gary Larson bit of humor has been emailed to me, handed to me in person at gigs and come via the post. It's also showed up on my honeymoon from an annonymous source. I have to admit, if there's one thing that comes in handy as a person who chooses the accordion for both their vocation and avocation it's a sense of humor!

More next week, until then keep your bass strap tight and don't forget to open your bottom bellows snap.
Posted by Dee at 12:52 No comments: Links to this post

How an accordion is made is fascinating to me, these pictures are from a visit to the Pigini accordion factory. The man in the left hand picture is working on a keyboard, the person below may be working on the bass section of an accordion. Note the reed blocks in the lower right hand corner of the picture, ea

ch reed was hand tuned and waxed into place.
Posted by Dee at 17:48 No comments: Links to this post

Horns on an accordion

Accordionists are well aware of the terms bellows, buttons, and keys but not all accordionists know or care about tone chambers.

A tone chamber changes the timbre (pronounced "TAM-ber") of the instrument and is used to apply tone color to the sound. The most common tone chamber is a wooden box inside the accordion that houses one rank of reed blocks. Sometimes it is a cover that slides into place over the air holes under the grill of an accordion.

The picture to above has examples of two early experiments in tone chambers for the accordion. If you look closely at the accordion picture you can see that early prototypes had the sound box (tone chamber) on the outside of the instrument. One of the additions resembles the bell of a trombone or tuba, the other is a hollow box used as the grill of the accordion. I suppose one could be called a tone chamber and the other a horn, verbiage aside the intent is the same, to change the timbre. 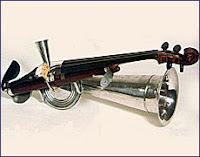 Although I can't say for sure how these instruments sound it is my guess that the open bell would project the sound, like a Stroh violin (see picture to right) and the enclosed box would give a hollow and muted tone.
Posted by Dee at 10:45 No comments: Links to this post

This link and text was just sent to me by one of my favorite former students. It's an excellent example of how most people don't even know they are listening to an accordion.......

Australian radio station Nova 919's pseudo-German Hans is a devoted Madonna fan and will do anything to get a personal birthday wish to the Queen of Pop. That 'anything' culminated in him breaking the Guinness World Record for Marathon Accordion playing last Thursday. Not only that, but he broke it by playing Madonna songs ONLY. That was no mean feat as he was not allowed to repeat a song a four hour time block and he played for 29 hours 30 minutes and 17 seconds! Let's just say, Madonna's full catalogue of work was explored. Hans' attempt to break the record and grab Madonna's attention even made it as a story on to Today Tonight. Nova 919 know that Madonna is an outrageously busy woman, but they are doing everything they can to make her aware of this story in the hopes of an acknowledgement from her - even just a sentence - it would answer Hans' (and everyone at Nova 919) prayers! The full story detailing his 29 hours 30 minute on the accordion can be found at: www.nova919.com.au
Posted by Dee at 12:57 No comments: Links to this post 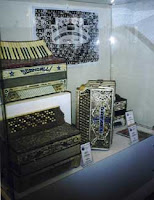 Here are a couple of other pictures from the Museo della Fisharmonica in Castelfidardo, Italy.

Notice the curved right hand keyboard that was supposed to facilitate moving up the keyboard with your hand in a natural arch.

The picture below is a keyboard only accordion, it is not missing the left hand buttons, it never had any. 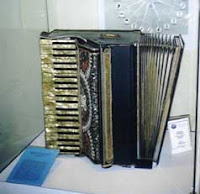 Posted by Dee at 16:10 No comments: Links to this post