More about the Museo della Fisharmonica

So you thought I was kidding about the Nativity scene in the bellows, right? The accordion museum in Castelfidardo has it all including an accordion stamp.

I've been to the museum a few times and am constantly amazed at the craftsmanship shown in the prototypes. And about their ingenuity and creativity, I'm speechless. More next week, until then, keep your bass strap tight and don't forget to open your bottom bellows snap.
Posted by Dee at 21:56 No comments: Links to this post 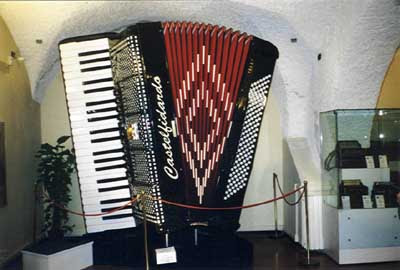 Italy is quite dear to my heart, after all it is the "Mecca" for people who love accordions. Why? Because most fine accordions are made between two hill towns in the Marche region of Italy.

In amongst the manufacturers and retail accordion stores winding in and around the streets of Castelfidardo and Loreto hides a wonder, the Museo della Fisarmonica (accordion museum), full of the historical prototypes of the modern day accordion. It is fascinating to observe all the different types of keyboards and shapes that have gone by the wayside in the evolutionary process of free-reed building technology.

The exhibit that ranked #1 with me? A 12 foot tall accordion that actually plays, yes, it works, I was lucky enough to hear it. The reeds are so large inside that they hook up an air hose instead of moving the bellows. Second place? An accordion with a Nativity scene in the bellows. Oh my.
Posted by Dee at 23:31 No comments: Links to this post

Air travel with an accordion

This post is for accordionists who want to travel with their instruments in addition to friends and family.

It's not too hard to travel with an accordion even with all the restrictions from the TSA. In fact it is easier now than years ago when you could board a plane with all kinds of stuff big and small.....except an accordion case which was always checked luggage. I tried everything from bracing the bases, splitting the accordion apart at the bellows and packing two containers to carry on (don't try this at home) and special hard shell cases to tears at the counter along with begging and pleading. Rarely was the instrument hand carried to the plane's luggage bays but instead went on its way tempting fate and gravity on conveyor belts and then workers brimming with apathy toward their mountains of suitcases.

In the 80s and 90s the airline companies managed to drop the instrument frequently which cracked the frame twice and broke the grill three times, once so severly that the manufacturer, Titano, had to rebuild it from the scraps - which they did expertly.

During the last eight years or so I've had no problems. My secret to free-reed flying bliss? A soft sided case. With a soft sided case the overhead bins of the most common planes fit even my concert model Titano Emperor with extended keyboard perfectly. I take the accordion on board as one of my carry-on pieces which means I can still have my laptop in a backpack. The instrument - along with the computer - never leave my care.

Even security checkpoints have been better as I always tell them in advance - after I take my shoes off - "this is an accordion". They usually want me to play a polka.
Posted by Dee at 16:55 1 comment: Links to this post

Yes, there is a vast network of people who love to play accordions. We know who we are. Some are hidden away in the privacy of there own homes getting the instrument out of the closet or basement when they think no one is looking. Some are recording and performing for thousands or tens of thousands of listeners knowing that they are are quickly growing breed of musicians that use the accordion - and other instruments of the accordion family also known as the free reed family - for haunting movie melodies (Amelie), raucous rock (Gogol Bordelo), classical (Astor Piazzolla), jazz (Art Van Damm), hybrid jazz & folk (Peter Ralchev), hybrid contemporary & folk (Maria Kalaniemi), or oddly artistic (Bill Schimmel with Tom Waits). You'll also find an accordion in almost every German, Irish and French folk group, indeed this instrument has been adopted by almost every country through their folk music including the Middle East and China.
Posted by Dee at 09:22 No comments: Links to this post

My friends and family have wanted me to start a blog for more than three years hence the 2005 start date of this blog with the first post midway through 2008. Maybe it was because I didn't know where to start.....so I'll start where I started life, with an accordion.